The blockchain is the shared database technology that underlies Bitcoin and Ethereum, and it is set to disrupt many industries in the coming decade. It’s already getting used in banking and payments, but most people don’t realize that this same technology can be used to solve the major environmental problems we are facing today on our planet. If adopted globally, it can even help stop or reverse climate change.

As permanent, tamper-proof databases that are shared by a community without a centralized owner, blockchains they are particularly interesting for environmental causes. They make it possible to track and verify transactions and interactions without a centralized authority. This can significantly increase transparency, efficiency, and accountability of environmental projects.

What Is The Blockchain?

The blockchain is a public ledger that can store transaction records or any other data. It is owned by no one, with a copy of it being stored on many personal computers around the world. Anyone can use it and help run the network. This often removes the need for middlemen and allows users to interact in a peer to peer way. It can also reduce transaction costs and increase efficiency. Because it is distributed, this kind of network is difficult to take down or corrupt.

Once a data record is made, it cannot be changed and stays in the ledger forever. A new data record can be added only after it is validated by multiple computers. This makes the data trustworthy without relying on a third party. The ledger is secured with advanced cryptography, which makes it difficult to tamper with.

Platforms like Ethereum allow users to create programs, or dApps (short for decentralized apps) that run on the blockchain and have a variety of uses – not just financial applications. The programs are executed automatically, and exactly as agreed upon by all participants.

Public blockchains are transparent, meaning that high quality data is available to anyone and is consistent across the network.

Here are some specific areas the blockchain can have a positive impact on the environment. Most people want to buy products that are ethically made, but that kind of information is often unavailable and difficult to verify. A product goes through many hands before it reaches the store. It’s very easy for companies to lie about how their products are made, what materials and chemicals they use, where they dump their garbage, or how fairly they treat their employees.

Blockchains can be used to track products from the manufacturer to the shelf and help prevent waste, inefficiency, fraud, and unethical practices by making supply chains more transparent. They can also help consumers be better informed of how each product was made and shipped so they can make more environmentally friendly choices.

If we tracked food, for example, this would enable buyers to purchase local produce knowing that it was actually grown locally. This would also cut down on carbon emissions due to food not having to travel long distances. Blockchains could ensure that a fish being sold at a fish market actually came from a sustainable fisherman, or verify that a bag of coffee really came from a fair trade producer.

Foodtrax is a blockchain-powered dApp being made by the Blockchain Development Company, and it aims to do just that – track food from its origin to the store shelf.

Provenace is another blockchain project that aims to make supply chains more transparent.

A recycling program on the blockchain could encourage participation by giving a financial reward in the form of a cryptographic token in exchange for depositing recyclables like plastic containers, cans, or bottles. Similar setups already exist in several places around the world, in particular in Northern Europe.

It would make it easy to transparently track data like volume, cost, and profit, and to evaluate the impact of each location, company, or individual participating in the program.

Social Plastic (aka Plastic Bank) is a project that is turning plastic into currency by setting up collection centers in third world countries, where people can deposit used plastic in exchange for currency, services like phone charging, or items like cooking fuel. They aim to clean up the world from plastic waste while alleviating poverty. They are now working on a blockchain-powered app that will allow people to exchange plastic for cryptographic tokens.

RecycleToCoin is another blockchain dApp in development that will enable people to return their used plastic containers in exchange for a token, through automated machines in Europe and around the world.

Traditional power grids are centralized, which can create inefficiencies in energy distribution, like having unused surplus. And in parts of the world affected by natural disasters or poverty, power outages can leave people without access to electricity.

A peer to peer blockchain based energy system system would reduce the need to transmit electricity over long distances, which can result in losses along the way. It would also help reduce the need for energy storage, because such trading can move electricity locally from where it’s being produced in excess to where it’s needed.

Transactive Grid is a joint venture between ConsenSys and LO3 Energy that is working on a blockchain platform that solves this problem.

SunContract is a blockchain-based peer-to-peer energy trading platform for solar and other renewables.

Power plant installations are expensive and are often financed by governments of large private companies.

A blockchain-based platform could enable institutions, companies, and individuals to get returns from directly investing in renewable energy installations in their area and around the world.

EcoChain is a blockchain dApp being developed, which aims to do just that – create a platform for people to invest in renewables and get a return on their investment.

ElectricChain is another blockchain platform with several apps like SolarCoin, which aims to incentivize solar installations around the world. 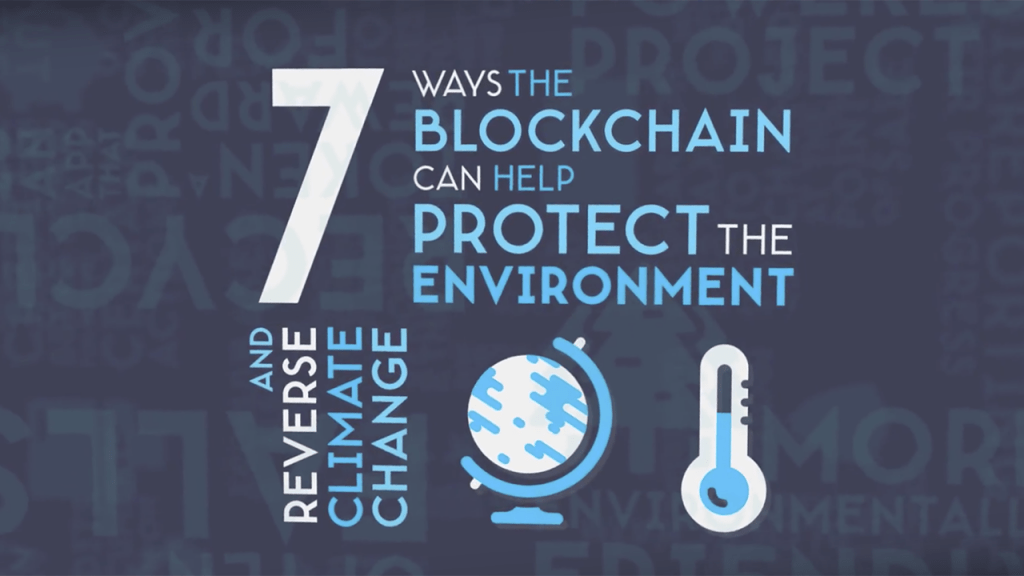 In can be difficult to track the real impact of environmental treaties, and sometimes there isn’t an incentive for governments or corporations to keep their promises. Fraud and manipulation of data are also problems in this area.

Blockchain could discourage corporations and governments from back-pedalling on their environmental promises or misreporting their progress, because the technology would allow to transparently track important environmental data, and show whether commitments were met. Once the data is entered into the public blockchain, it stays there forever.

Legal document storage on the blockchain could cut down on fraud and manipulation, for example within the global carbon credits scheme.  Around 979 million is spent annually on administrate this system alone. If you have an immutable record of credits bought and sold, then there is little chance of corporations and governments looking the other way when carbon credits are bribed or sold illegally.

When you donate to an environmental charity, it can be difficult to track where the money goes or how it is spent. Bureaucracy, corruption, and inefficiency are still common in the charity space.

Blockchain technology can ensure that money intended to be a reward for conservation, or a payment to a specific cause, does not disappear into unintended pockets through bureaucratic labyrinths. Blockchain-based money could even be released automatically to the correct parties in response to meeting specific environmental targets.

Blockchains enable funds to be transferred without bank accounts — which is beneficial to people in countries that lack banking infrastructure. This means that it’s possible to send money directly to the people who need it without going through a complex web of middlemen or a centralized authority.

Bitgive and Bithope are two charities working with cryptocurrencies.

Tracking the carbon footprint of each product using the blockchain would protect this data from tampering, and it can be used to determine the amount of carbon tax to be charged on at the point of sale. If a product with a large carbon footprint is more expensive to buy, this would encourage buyers to buy products that are more environmentally friendly, and would therefore encourage companies to restructure their supply chains to meet the demand for such products.

A blockchain-based reputation system could also give each company and product a score based on the carbon footprint of the products they sell. This would make manufacturing more transparent, and discourage wasteful and environmentally unfriendly practices.

In a world of complexity, it can be difficult for individuals or companies to see the direct effects of their actions. Therefore, the incentives for acting in an environmentally sustainable way aren’t always clear, especially in the short term.

Blockchain technology can help both individuals and companies to see the real impact of their actions and incentivize them to take the actions that benefit the environment. The blockchain can be used to transparently track a variety of data like the carbon footprint of each product, the greenhouse gas or waste emissions of a factory, or a company’s overall history of compliance to environmental standards. Companies and individuals can be incentivized to act in an  environmentally sustainable way through the availability of information, tokenized credits being issued for taking certain actions, or blockchain-based reputation systems.

These new incentives could completely change the drivers of our economy, and benefit not only us, but the future generations living on our planet.

Know another blockchain project working to protect the environment or stop climate change? Post a comment below.