Good versus evil. That’s the narrative we hear over and over again in media and entertainment industry. We’re in love with the battle that occurs when the hero is pitted against the villain. The typical hero vs villain narrative makes things simple; black and white, good vs evil, us versus them. We don’t often sympathize with “evil doers”, “terrorists”, or “bad guys”. We don’t care to know them any deeper than the label we give them, we just need to know who to point the finger / gun / bomb at. 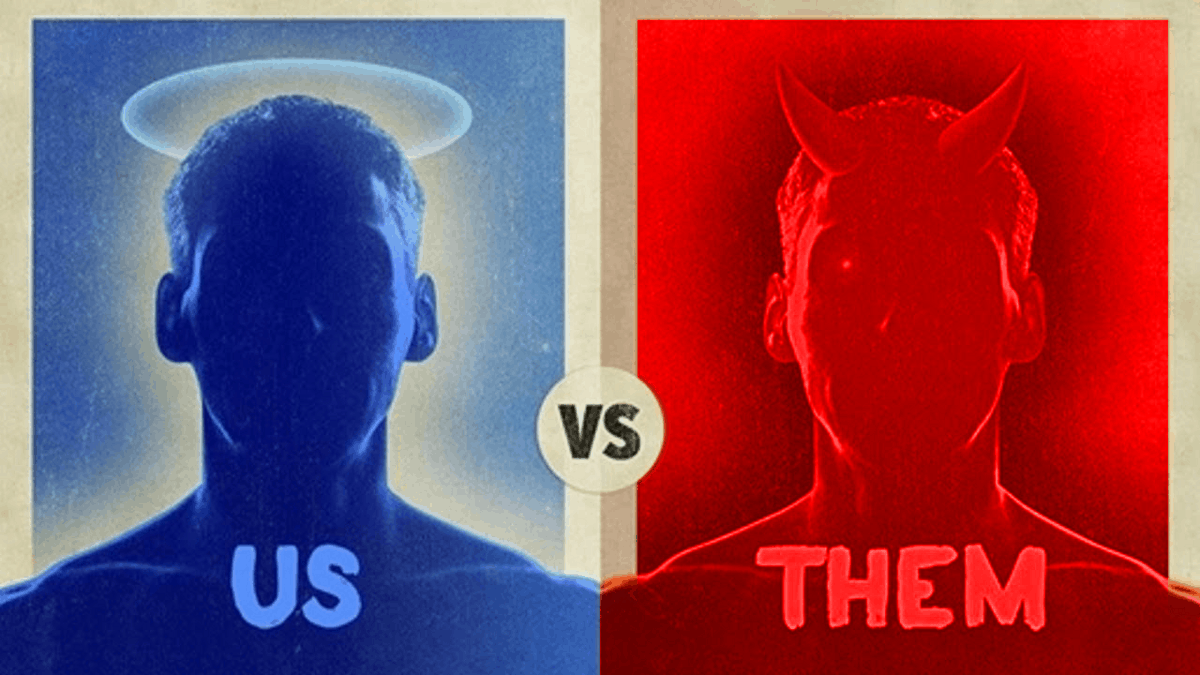 However, believing in the simplistic motives of villains and outsiders prevents us from understanding what really drives them. It causes us to see them as less than human. Just watch any Michael Bay movie (don’t though), and search for the human motives and messages behind the villain’s actions. You’ll find nothing more than bad for the sake of bad, good for the sake of *yawn*. Our media has morphed the villain into a literal representation of evil, devoid of meaningful motive or symbolism.

This over-simplification of us and them can be found at the heart of all conflicts, real and fictional.

Take Ferguson for example. The sheer volume of blanket statement and general blaming for the state of affairs in Ferguson is astounding. Rather than let the story remain about a couple of individuals, we’ve allowed it to polarize us, infuriate us, and fuel us to begin picking sides in a so-called “race war”. We’ve allowed ourselves to be defined by our class, race, and income, thereby turning anyone outside of those groups into “the bad guys”. I want to tell every person on this planet that it doesn’t matter what side you’re on, if you’ve chosen your side, you’re on the wrong one. People are just people, they are not their group, race, religion, sexual preference, or career choice. When we believe in “us” and “them”, we rigidly place ourselves under the sigil for our group, and it does nothing more than to reinforce the problems and stereotypes of that group. It all comes from our natural desire to define and compartmentalize one another, to give an external source to the pain we feel inside.

This in-group / out-group mentality has roots in our evolutionary past. As we evolved as a species, competition was necessary for our survival. It was and still is built into us to get bigger, stronger, and faster than the rest. It is built into us to take care of our families and our communities and be selective about who we allow into our groups. Only those with similar characteristics may apply. All those who were different from us automatically got lumped into the outsider category. 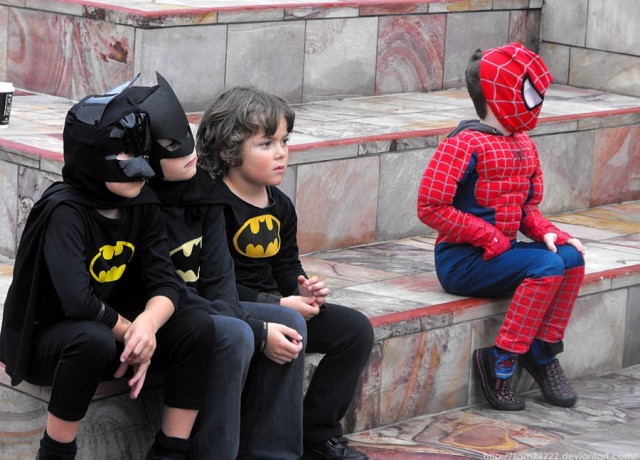 Until now, we’ve never had the ability to create things and distribute resources and information on a near-instantaneous and global level. Physical life is no longer a struggle. In today’s world of abundance, our brains are running on outdated software. We need to train ourselves to think about the global community as our in-group. We need to think beyond our tiny little social groups and see the bigger picture. It’s no longer us and them, it’s just us… all of us.

But, like any great social movement that came before, a change in thinking requires a change in our cultural narratives. When Martin Luther King gave his “I have a dream” speech, he created a new cultural narrative for blacks and whites all over America and the world. His story caused us to redefine our ideas about equality. A new social narrative requires individuals to change direction from the herd. It requires well-meaning people to stop defaulting to a script and lazy group-thinking. In terms of our cultural narratives, it requires that we rethink the archetypes of our heroes and villains…

There is no such thing as a villain, only a hero, fallen.

Every villain believes he is doing the right thing, or is justified in his actions. In the mind of someone who commits violence, though it may seem absurd and unlikely, the act is actually a solution or a morally justified course of action. This fallacy of ‘bad for bad’s sake’ is reinforced in nearly all of our cultural narratives: TV shows, movies, books, news, and especially in ads. News media is a repetitive cycle of searching for the bad guys in order to assign blame. They incessantly direct our attention to external forces and away from internal ones, which is exactly what motivates us to do the things that keep the wheels of capitalism and materialism turning.

Broadcast media is designed to keep you blaming people or circumstances for your problems, and solving them with products. They need you to be agitated, confused, and always chasing shiny objects.

That’s the key point: external solutions = money to be made. Advertisements attempt to magnify our pain in order to drive us to solve internal problems with products. The external battle gives us easy targets and easy solutions: “You’re not pretty enough — go buy more makeup, you’re not sophisticated enough — go buy cigarettes, you stink — go buy perfume.” We’re trying to buy good feelings without realizing that the power to feel good rests entirely within ourselves. It’s like marketers and news organizations have caused us to be stuck in the bottom levels of Maslow’s Hierarchy of needs; perpetually chasing ways to feel pleasure and avoid pain. 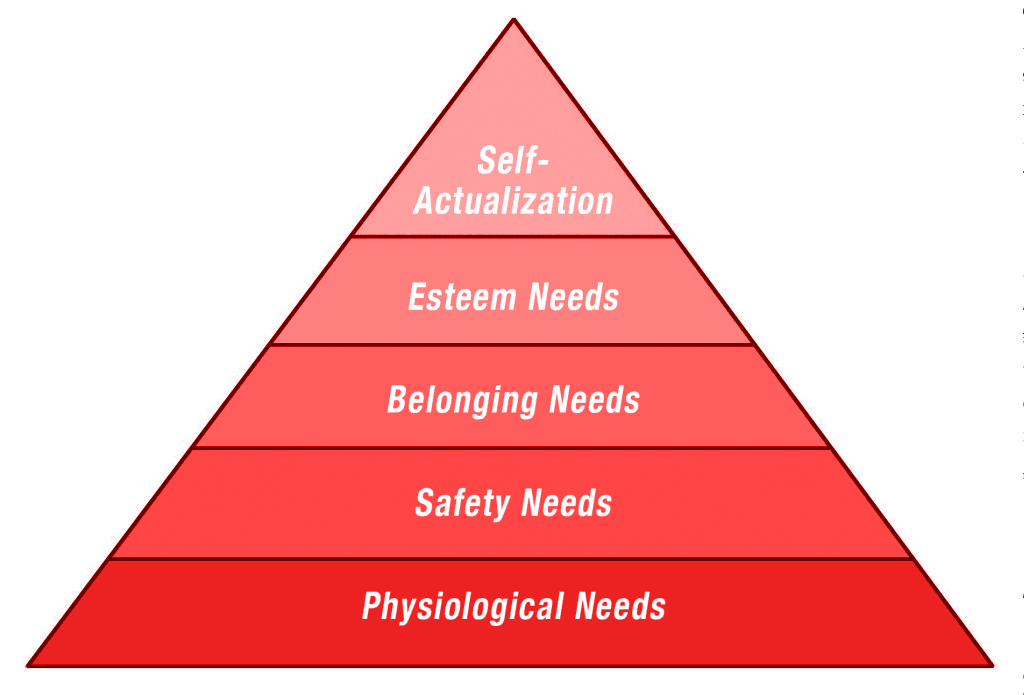 We need to learn how to manage the fears created by media messages, and begin facing our inner demons. We need to look inward to find out what we’re doing to get in our own way and how we are holding ourselves back. Maybe that means practising meditation, maybe it means taking psychedelics, maybe it means reading books in the self-improvement category… but it definitely isn’t something you’ll find at the end of an aisle.

The Digital Age of
Empowerment Storytelling

As media creators and marketers, we are the architects of our cultural narratives. We need to stop making our audiences feel inadequate and start empowering them to become better human beings and achieve greater things through empowerment storytelling.

Empowerment storytelling is about encouraging the hero to fight the internal battle, find their own source of power, and climb up Maslow’s pyramid of needs towards self-actualization. As storytellers, we often forget that the villain is meant to be symbolic. He is just the unrealized version of the hero, and symbolizes the temptations of the hero’s own dark side: lust, gluttony, greed, laziness, hate, envy, and vanity.

Our modern myths need to reflect our modern lives: we’re now pioneers of virtual worlds. The millennial generation is extremely motivated to create, build communities, contribute to causes, and find a higher purpose in life.

The stories that speak to this generation will cast the villain and the hero in the same role. They will cause us to sympathize with the villain, because we see him in ourselves. They will encourage us to overcome our own evils and take personal responsibility. Think of our favourite movie and TV characters of the past year: Maleficent, Caesar from Planet of the Apes, Tyrion Lannister from Game of Thrones, and Heisenberg from Breaking Bad: all conflicted characters, all fighting their own internal battles, all struggling to be better. We’re not emotionally drawn to the the characters who fight the external battle, we’re attracted to the internally conflicted ones.

My favourite movie of all time, Fight Club, perfectly illustrates this. Tyler Durden is both the hero AND the villain of the story. We’re drawn to Tyler — even though he is a crazy and violent hooligan — because we recognize him in ourselves. He is the literal personification of the dark side of the hero. He is what happens when we ignore our need for an outlet, when we let materialism define us, when we let modern life coddle us. He represents our desire for freedom, self-expression, and rebellion.

So what is the moral to the story I’ve been trying to write? Well, I believe it has a lot to say about how we look at ourselves. We need to look at our inner villains before we seek to blame others for our problems. Once we’ve found him, we need to work to rehabilitate him. Let his shortcomings be a roadmap for how we want to change the world. Let’s recognize that no external group or force is responsible for our problems. Only then can we start to look at others, and by that point it should be easy to recognize that all of them have their own inner hero and villain too.

I believe we could live in a much better world if we stopped defining ourselves and others by the groups we belong to. We should have the agility to move in and out of our groups and start seeing people on an individual level. We are more than the lazily crafted labels we give one another. We are all individuals no matter our background, race, religious beliefs, or aspirations in life. Yet, we’re all members of the same global family.

And if that isn’t enough to make you look beyond your labels and the labels you give to others… then remember, you’re still just a consciousness in a meat suit, floating around on a tiny blue marble in infinite space.

If you’d like to hear more smack talk about this group mentality, we’ve talked about it in a recent podcast episode at futurethinkers.org/episode13.